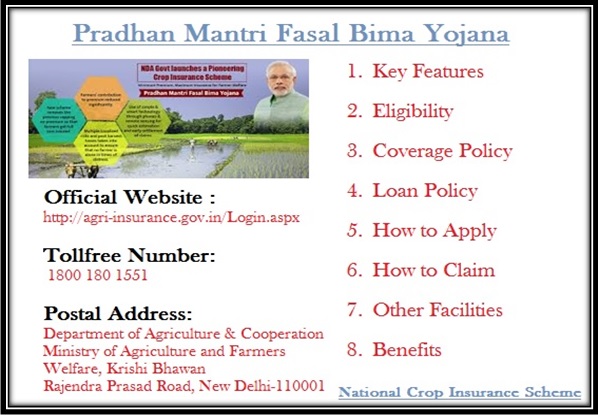 The Pradhan Mantri Fasal Bima Yojana, popularly known as the PMFBY has been announced by the central government for reducing the burden of paying for the premium of the agricultural insurance. Under the scheme, the farmers will also receive financial assistance for recovering from crop losses. The scheme will also assist the farmers in getting the policy claims settled quickly and without much bureaucratic red-tapism.

Though the scheme has been designed for helping the farmers; all will not be able to be a part of the program. Here, you will get a closer look at the eligibility criteria of the policy:

If you want to register under the PMFBY, then it is important to know and understand the salient features of the program:

If you are interested in being a part of the PMFBY, then you need to know about the documents, which must be produced.

When it comes to the coverage of farmers, the government wants to bring all kinds of farmers under the insurance scheme. For the time being, this segment has two main components – the compulsory component and the voluntary component. Apart from these two components, the government has kept reservations for farmers who fall in the SC/ST/OBC category as well.

The compulsory component includes all those agricultural workers who have already applied for another loan that has been used for raising a seasonal crop. The seasonal crop cultivation loan is also known as the SAO credit.

The voluntary component includes the agricultural workers who have not applied for any kind of agricultural loan that has been used for raising a seasonal crop. They also have permission to be a part of the PMFBY.

The government has produced a list of crops, which can be insured under the PMFBY scheme. The list contains food crops as well as commercial crops. The list contains rice, wheat, pulses, millets, castor, groundnut, linseed, cashew nut, guava, banana, and mangoes.

One needs to know about the risks, which will be covered under the scheme. The following are some of the key points that you need to keep in mind:

The insurance policy will not cover the damage of the crops if the reason for the damage is artificial. For instance, the damages brought about due to the break out of wars or any nuclear disaster will not be compensated by the scheme. If the crop has been stolen or has been set on fire by people, the farmer will not get any money for repairing the damages. The scheme will also not cover any damage done to the crops by the action of wild or domesticated animals. In short, the PMFBY will only provide monetary assistance, in the form of insurance coverage, if the damage has been done by natural forces.

All the details, associated with the PMFBY are highlighted in the official website of the scheme. The portal is maintained by the respective government department and it is updated from time to time. If you want to register under the scheme or gather any information related to it, then you can click on the link and see for yourself.

One can also get information or register under the scheme directly by using the smartphone application. All you need to do is download the application called ‘Crop Insurance App’ on your smartphone that runs on the Android OS. Department of Agriculture Cooperation and Farmers Welfare have the link to the application on their official website.

If you are not well accustomed to the digital media, you can always go down the traditional path to acquire the information you require. All you need to do is dial the toll-free helpline number, 1800 180 1551, and talk to the representatives.

If you are interested in applying under the scheme, you will have to fill in the registration form. For this, you need to click on the official link of the scheme, https://pmfby.gov.in/ . Once you reach the home page, you will have to click on the link that will provide you access to the online form. Click on the link and download the form. The option for submitting the form online as well as offline is available. So, download and get the printout of the form for offline submission or complete the process online.

Applying online is much easier than applying offline. Still, both modes are available for the people. The following steps must be followed by anyone interested in making the application via online process:

There are no extra points for guessing that the implementation of the scheme will require a lot of money. The government has already taken the steps for gathering huge sums of money. The budget for the scheme has only increased over the years. What was Rs. 5500 crore during 2016-17, increased by a whopping 40% during 2017-18. The government has the hope of bringing around 50% of the cultivated land under the scheme. During the announcement of this Annual Union Budget, the central government said that they will assign around Rs. 9000 crores for the successful implementation of the scheme.